It is used to low grade magnetite. Due to the strong magnetic and easy to grind, one stage grinding is adopted for magnetite with coarse particle distribution, conversely the multi stages grinding. At present the fine grinding technology promoted by Xinhai improves the concentrate grate from 61% to 67%

A magnetite in Inner Mongolia, the main mental mineral was magnetite with disseminated structure and fine particle distribution. The iron content was about 12-16%. This plant adopted the grinding-weak magnetic process and obtained 65% concentrate grade and 90% recovery rate, but the operation cost is too high after a long time running. It authorized Xinhai to reform the process. Xinhai did not only keep the original indexes, but also reduce the operation costs. Indexes comparison as follow

Due to the low grade of the iron ore, the stages grinding and stages separation could reduce energy consumption. Cost saving is the key of developing the mine. The fine grinding process has guide significance for similar iron ore

Grinding and classification: the first- and second-grinding fineness was -200 mesh (67%) and -325 mesh (88.47%) respectively. Bearing-drive energy-saving ball mill was adopted so that grinding costs were significantly reduced. Upgraded spiral classifier and fine screen were adopted in the first- and second-stage classification respectively to control the particle size strictly.

The project adopted advanced, sound and energy-saving equipment and simple auxiliary facilities to cut construction costs and increase output. There was no environmental pollution, meaning that no waste water was discharged.

As the ore properties were complicated, Xinhai carried out a series of mineral processing tests. After the comparison among them, an ideal process was identified for the ore.

Iron concentrates dewatering: iron concentrates were pumped to the permanent magnetic filter and dehydrated together with already produced concentrates; filtrate returned to the system for recycling and filter cake was transported by belt conveyor at three times to the dump.

While increasing the efficiency of resources exploration, Xinhai paid attention to environmental protection. Effective solutions were adopted to address the spread of dust and noise and the disposal of waste water and tailings so that green development of the mine was ensured. 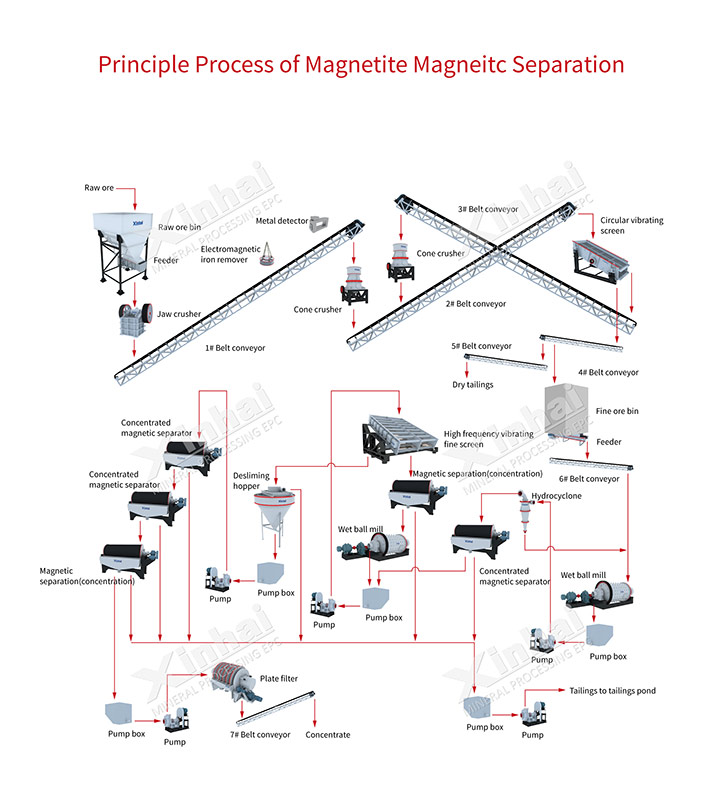