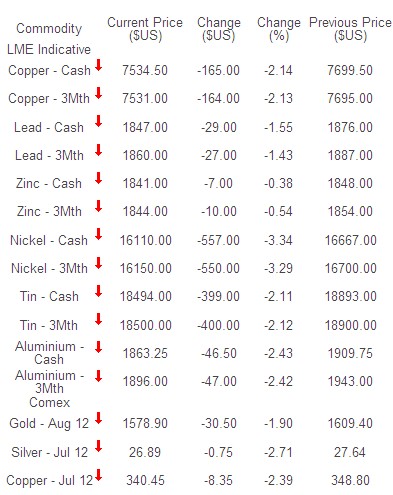 The slight drop in US stocks could take its toll on the Australian market this week, although China’s policy review in response to economic pressure may insulate commodities, which traded lower in London on Friday.

In an effort to stabilise a slowdown and following The People’s Bank of China’s move to allow banks to offer bigger discounts on loans last week, Chinese economists expect major central banks to take more conventional and unconventional measures in coming months to loosen monetary conditions and encourage bank lending.

China’s inflation slowed 2.3% in June to its lowest level since January 2010.

Asia’s largest economy grew at its slowest pace in the three years in the second quarter.

This added to the risks of a global recovery already threatened by a worsening crisis in Europe and faltering employment gains in the US.

Wall Street closed in lower territory on Friday with the S&P 500 down 1% to 1354.6 points, the Dow Jones Industrial Average shedding 1% to

Commodities on the London Metal Exchange all posted a loss with nickel recording the highest drop of 3.3% to $US16,110 per tonne followed by aluminium falling 2.4% to $US1863/t.