What the Tailing Can Do for? 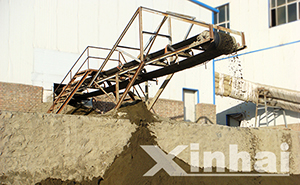 The existing tailings pond in our country is  12655, among which the large and medium-sized tailings above three levels are  for 533, accounting for 4.2% of the totals, and among which the small tailings  about four and five levels are for 12122, accounting for 95.8% of the totals.  At present, mine tailing has caused serious environment problems and have huge  safety hidden danger as well as has become an important problem for restricting  the sustainable development of Chinaese mining economy and mining city. For this  problem, we have to consider what the tailing can do for?

Tailing is mine waste which is  discharged by mineral processing enterprise in a certain technical and economic  conditions. But the tailing is not absolutely useless. It mostly contains a  variety of colored and black rare earth and nonmetal minerals and is a very  valuable and recoverable resources. Once the technology and economic conditions  achieves, it can be effectively developed and utilized. What the tailing can do  for? At present, the tailings are generally used as underground mining goaf  filling that is to say the water and sand filling material or cement filling  aggregate. And some are directly used to cover soil farmland, afforestation and  planting crops in the tailing stacking field. In fact, the most economic  benefit of tailings treatment is making sand and used as raw material for  building materials. For example, the tailings can be used as raw material of  cement, tile, aerated concrete, refractory materials, glass, ceramic, concrete  aggregate. In addition, the tailings can replace a part of the mechanism of  sand to make concrete, building roads, and pavement materials.

The comprehensive utilization of  tailings resources at home and abroad can be summarized as follows:

First, the comprehensive recycling of useful components of  tailings resources should be done as far as possible. Adopting advanced  technology and reasonable crafts to re-beneficiate the tailings to recycle the  useful components greatly. Thus the number of tailings will further reduce.  Some factories is directing to no tailing.

Second, lings are generally used as underground mining goaf  filling that is to say the water and sand filling material or cement filling  aggregate. The most ideal thing for tailing is to be the underground mining  goaf filling and the filling craft used is full tailing filling process. Now it  is still in the experimental stage. In the actual production, the coarse  particles of the tailing are used as the underground mining goaf filling. After  discharged by the conveyor, the tailing of the ore dressing plant will be feed  to the tailing preparing section to be separated to get coarse particles and  fine particles. Coarse particles will be sent to underground goaf and fine  tailings will be sent to tailing pond for stockpiling.

Five, on the field of tailings, soil reclamation, crop planting  and afforestation can be done.

Finally, preserving the tailing in the tailing dam which is  specially built is widely adopted in the majority of concentration tailing  disposal plant.